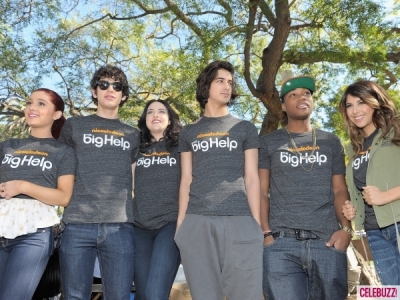 Taking it back to the day I covered Nickelodeon’s “The Big Help” for Celebuzz about 3 years ago. Where I got the chance to talk to the cast of “Victorious” and see how they were giving back to the community. This was waaaay back before Ariana Grande because Mini Mariah.

It was a chaotic day for teachers and staff at the Thomas Starr King Middle School but it was a fun and exciting day for 6th graders as they got a special visit from the cast of Nickelodeon‘s hit show Victorious early Tuesday morning!

The cast teamed up with Nickelodeon’s The Big Help and the National Wildlife Federation to plant and clean up an outdoor garden. Celebuzz was there to capture the exciting moments and interview the cast as they helped rebuild their outdoor grounds into an educational outdoor classroom students can learn more about the environment!

It must have been a change of scenery from their usual elite performing arts school for Victorious cast members Leon Thomas III, Daniella Monet, Avan Jogia, Elizabeth Gilles, Matt Bennett and Ariana Grande as they came out to lend a green thumb on Tuesday morning! Upon arrival the cast members were greeted with a cluster of kids screaming and calling out their names anxiously. While girls in P.E. class were waiting for a glimpse of their favorite star, others asked for autographs.

The cast and student came prepared with their best gardening tools and spent the morning pulling weeds, painting, making their own plant pots and even eating some of the vegetables and herbs the students had grown. We spoke with Daniella Monet who told us about the tasty treats she got to enjoy.

“I was so shocked at how much was actually flourishing I mean I harvested with them and I tasted everything they were growing and still have room for more. I was eating everything, I had the black kale, the rainbow Swiss chards, everything, I had it all.”

Click here to read the rest of the article!