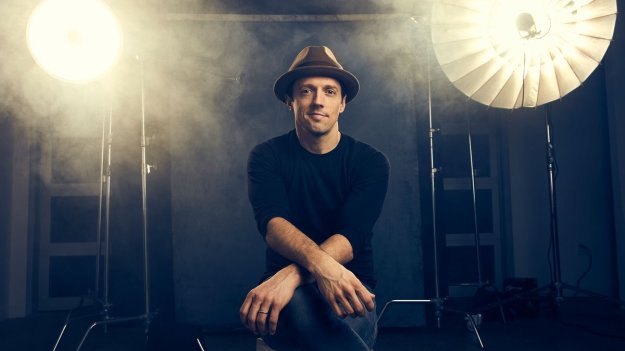 Jason Mraz strongly believes that love is worth fighting for.

For the past couple of years, following the release of his fifth studio album, “Yes!,” the 41-year-old singer has been figuring out how his music, his passion and his purpose could align to continue to inspire others. Now, with the upcoming release of his latest LP, “Know,” Mraz is doing just that, but it wasn’t an easy ride.

What Mraz does have to offer is an abundance of positivity and love that his fans connect with through his songs. But to get there, he says, he needed to have his “heart broken wide open.”

“To write an album, my experience every time is, you have to have your heart broken wide open,” Mraz explains. “Sometimes that feels good. Like with the ‘Yes!’ album, it felt really good because I realized the album was the culmination of my love affair with Raining Jane [the indie-rock-folk band who he’s been working with since 2007], and we had all the songs available to us because we’d always been writing. And that was really the kind of heart-opening where you feel like you fall in love.”

“This time was many different things, because I felt like the musical landscape had changed, just in popular music,” he explains, adding that he was consistently experimenting. “Trying all sorts of things, but not really getting anywhere. And then the election happened and I didn’t really know how to come out and sing songs that say ‘Everything’s OK’ when suddenly the world is revealing just how divided it is. So I didn’t really know how to continue to have my gay parade down the middle of the street while there was serious debate happening…I felt guilty for probably the entire 2016 to 2017. I felt guilty for wanting to stay positive.”

Mraz instead took time to understand who he was, continuing to write, trying to give people the soundtrack to the most special moments of their lives. After delivering a slew of songs to Atlantic Records, A&R David Silberstein went through his body of work and curated what he thought was “a nice collection of love letters,” as Mraz describes it.

“I’m grateful to [Silberstein] because I honestly didn’t know where I was going,” confesses Mraz. “I had all these different ideas, but they were almost a bunch of weeds in my garden and I didn’t really know what I was growing. And David went through it, like a gardener, and sort of picked the flowers. That was very helpful to me because I was starting to get a bit down.”

There were ups and downs, a “big pool of rejected material,” he says. “But it’s not that those songs are rejected, necessarily, it’s just that those songs were what it took to get to the other songs. Those were the prototypes and the version two and version three before you get to the ‘Oh, how can I make a more joyful chorus?’”

The album, he previously told ET, is also “an album of love letters that I wrote mostly to my wife, but also to myself to constantly remind myself that love is still the answer.”

With “Know,”Mraz delivers heartfelt songs that give people hope and makes them believe in love again. His first single, “Have It All,” was inspired by a 2012 trip to the Southeast Asian country of Myanmar. There, he came across the common greeting “Tashi Delek,” which translates to “may you have auspiciousness and causes of success.” That phrase is included in the feel-good lyrics and was a catalyst for Mraz to help the world heal and move forward.

“I was able to… stand behind this record as more of a person who believes in love and that love is worth fighting for,” Mraz details. “That optimism and hope, and creating a reality where goodness thrives, is not a bad thing.”

“Have It All” also inspired a documentary of the same name, which was screened in theaters on Aug. 7 for a special one-night-only event. Mraz hopes that sometime in the near future he can share it on other platforms for those who didn’t get a chance to see it. While the record doesn’t come out for a couple more days, fans have already listened to “Unlonely,” “Might as Well Dance” [the music video features footage from his wedding day] and “More Than Friends,” a collaboration with Meghan Trainor.

“[Meghan and I] decided to book a studio day together,” Mraz shares, explaining that producer Andrew Wells suggested the collab. “We were like, ‘Let’s write something really great! And let’s not overthink it and keep it simple and cute, and it worked! It worked out really well. She’s present and committed to joy and fun and love. And she’s not attached to one particular genre. She really blends a lot of different things together. She’s a great writer, a great producer. I have nothing but good things to say about Meghan Trainor. I think she’s fantastic.”

While further discussing his 10-track record, Mraz also shares a few “factoids,” as he calls them, about a couple of his songs.

Track eight, “Making It Up,” was co-written by Mraz and his friend Bob Schneider, who interestingly enough released his own version of the same song in March. For many years, the two have engaged in a songwriting game where they submit songs to each other every week. A couple years ago, Schneider submitted “Making It Up,” which Mraz thought was beautiful. After asking him to let him take the song, he reworked some of the verses and added his personal touch.

“His verses are completely different, his attitude is different,” Mraz explains. “I’d love to give Bob a shoutout. He’s my favorite writer and has been a big inspiration for me since the beginning of my career. His version is insane, mine’s the Mr. Rogers version.”

As for “Love Is Still the Answer,” the final song on the album, it features the Tesoro High School Madrigals, conducted by Grammy-winning music instructor Keith Hancock. Hancock and Mraz’s musical relationship is serendipitous, as their two paths continued to cross until Mraz asked to collaborate with him and continues to.

“We’ve created a new friendship through that, but it was really just through a quick introduction but then the universe kept putting us together so I thought that was really fun,” he shares. “And they sound gorgeous closing the record with their voices.”

Once again, he echoes those sentiments, saying, “I truly do feel like I have all and more than I need. And I’m trying to make good with what I have and serve a good purpose with it.”

For him, that includes working with his Jason Mraz Foundation to further arts education and advancement of equality, beginning with programs in San Diego.

“We want to create new programs to inspire collaboration, inclusivity and equality or support the programs that are already doing a good job and just need funding,” he shares. “In the next few years we’re going to be taking that on even heavier… all the money that is earned right now just comes from concert tickets. Every concert ticket equals $1 to the foundation.”

The “Lucky” crooner is currently on his Good Vibes tour, a “feel-good” show where “every day we get to bring our messages of inclusivity and equality and peace and love and demonstrate it through our band and through our music,” says Mraz.

As the Waitress star begins to share his new music with his fans, it’s been almost 16 years since the release of his debut album, “Waiting For My Rocket to Come.” With a successful career that includes two GRAMMY Awards, over 12 million singles sold and devoted fans, the Virginia native still feels the same giddy feeling when dropping an album.

This article was originally published  on Aug. 8, 2018 on ETOnline.