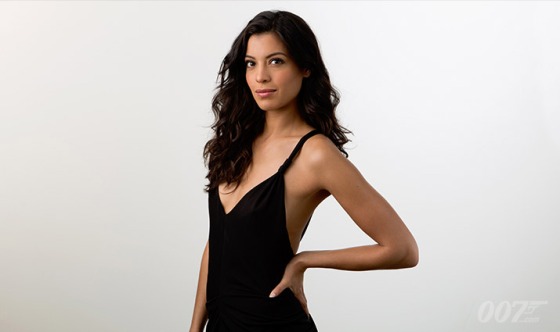 Stephanie Sigman made history becoming the first Mexican Bond girl for the upcoming 007 film, Spectre. The actress plays a mysterious woman named Estrella who gets to rub shoulders with Mr. 007 himself, Daniel Craig, while he makes a stop in Mexico City.

Now as her career continues to bud momentum, and after launching a global Belvedere campaign for the feature, I had the opportunity to speak with Sigman for Variety Latino about how it was working alongside Craig, her favorite memories from filming and how important it was for her to show her native country on the big screen.

“It’s an honor to be a part of this and I think it’s a dream for a lot of girls out there [to be a Bond girl], and a lot of actresses’ dreams too,” stated the Narcos actress about her grand triumph. “I’m living the dream. It feels amazing.”

That amazing feeling transferred over to the actual filming of the opening scene in Mexico City, where we see her make her 007 debut.

“The moment that is going to stay with me forever is when I was in the center of Mexico City. There were a lot of extras there and it was so beautiful. It was all about the Day of the Dead and Daniel was there, Sam Mendes was there, and everyone was so excited,” Sigman said reliving the moment. “There were so many Mexican people as part of the crew that were working so hard, but it was also a celebration. It was my first time filming in the Centro Historico in El Zócalo. It was a perfect first time because I was doing this movie in my country, showing my traditions and now everybody is going to be able to see that and see Mexico, and the city, and the Day of the Dead and I feel so proud of it.”

Working on a huge set can always have it’s ups and downs but Sigman was more than happy to be a part of such a huge production that she enjoyed just being on set and learning from the pros.

“It’s just so fascinating watching Daniel Craig work because he knows what he’s doing and he’s so experienced when it comes to doing the technical part of the film. We were doing this scene and I was just there watching everyone work to learn from them,” she said. “I think he makes it easy for everyone because he’s a cool guy and he has great energy on set. He’s there for everyone. Sometimes you have actors who just have to go. But he’s there, he’s committed.”

So how did the Miss Bala actress land the coveted role that changed her life? Well, thanks to food poisoning she almost didn’t get the gig.

“I was in Mexico City visiting some friends and I was supposed to audition for this. Everything was a secret so I only had a scene from an older James Bond movie. A very simple scene because they wanted to see what you could do with it,” detailed Stephanie. “I couldn’t go because I had food poisoning and I was at the hospital. But I really wanted to do the audition so I got a camera and my friend and I self-taped. I sent it and I told my friend I probably wasn’t going to get it because I felt so bad and weak. I didn’t feel good but I was trying my best.  Then after a month they called me, I met with Sam Mendes, we talked for like ten minutes and at the end he told me see you in London. I was like, what does that mean? I was like ‘Ok, my pleasure’ and I got it!”

And as for her pick on who the next James Bond should be? “Michael Fassbender. It might be my own bias because I like him. I love his work and I think he’s sexy,” laughed Sigman stating that her ideal role would be to be “007.”