It’s Halloween time in BlueBell and its citizen’s are just as thrilled about the town’s festivities.

Last week left us with Lemon quitting the Belle’s in Take This Job & Shove It.

Help Me Make it Through the Night, is the perfect title for last night’s episode as everyone is literally trying to make it through this, interesting night.

Wade’s in bed with a girl and it’s NOT Zoe Hart! Too bad we find out that his little one-night stand has a very threatening and buff BF who makes it his mission to track down Wade all through the night.

Lemon is blacklisted from the one party she desperately wants to attend and enlists some help to get her in. The Halloween Masquerade Ball is one of the most prestigious soirees and the only place that Lemon can find a suitable mate. This means serious business is in order as it’s time to call the one and only Grandpa Betty, her gracious and oh-so-charming self, *not the sarcasm, has arrived to help Lemon get into the Ball, much to Brick’s distaste. With a snap of her fingers Lemon is in and G-ma even got the righteous bachelor, Tanner Hughes as her date. You go grandma! Or so we think.

Much to Zoe’s dislike, Joel and Wade spend some time together as he is on his quest to make new friends. They actually get along quite well on account that we all know Wade still loves Z.

As the night continues, having secured an invitation to the Ball and Tanner H., Lemon is less than thrilled with her pretentious date. One Tree Hill’s Robert Buckley makes a guest appearance as Peter, a news producer covering worldwide issues, who’s passing by town. What a cutie pie is he! Having been invited to the Masquerade we see that he’s quite smitten with Lemon. Being her escape to her tool-of-a-date at the Halloween Masquerade Ball, they make a dash for it and walk the streets of BlueBell and grab drinks as they get to know each other. Their night ends with a special kiss and an invitation into Peter’s B&B room.

Lovebirds, Levon and AnnaBeth’s anniversary is coming up and Lavon has a surprising night for AB that has her thinking she might get proposed to. AB runs to Zoe for a check up and to gossip about what Lavon might be up to, discovers a potential ovarian cyst that could lead to infertility. Scared that a future with Lavon would be ruined by this news,  AnnaBeth tries to distract him by having Zoe and Joel come over on their special night. 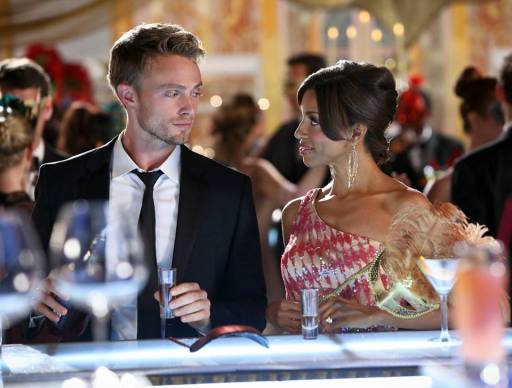 Oh and that Wade Kinsella cannot get his hands off married and attached ladies as he continues to go after another one at the Masquerade Ball and continues to escape the refrigerator-sized bully coming after him. George disgusted by Wade’s actions asks him what is wrong with him and makes it known that Wade is only going after the ones he shouldn’t be with because he can’t get the one he truly wants.

At the end of the night Lemon, AB, and Wade make it through, as Lemon got a night to remember ;), we find out that AnnaBeth is healthy and ready  to have as many little football babies as she pleases but there was never a proposal in Lavon’s plans just a viewing of “The Night Of the Living Dead”, and Wade didn’t get killed by the crazy one-night stand’s boyfriend!

What are your thoughts on this week’s episode? Will Peter be Lemon’s one true love? Are we finally starting to maybe like Joel?