Happy Halloween kiddos! While everyone’s posting the best and worst costumes, movies, activities and things to do for tonight’s festivities, I decided to go back and give you a taste of when I tried by best at being Usher.

That’s right, U-S-H-E-R, R-A-Y-M-O-N-D, and if you didn’t spell it out like he does in his song “Nice & Slow” then you’re just not feeling my vibe right now. Anyway, not too long ago when Ush was on The Voice he became pretty known for his sitting position and hashtag ‘UshersLeg’ became a trending topic. I’ll let the below explain from my post on Celebuzz or view it HERE on the site.

What’s All The Fuss About #UshersLeg? 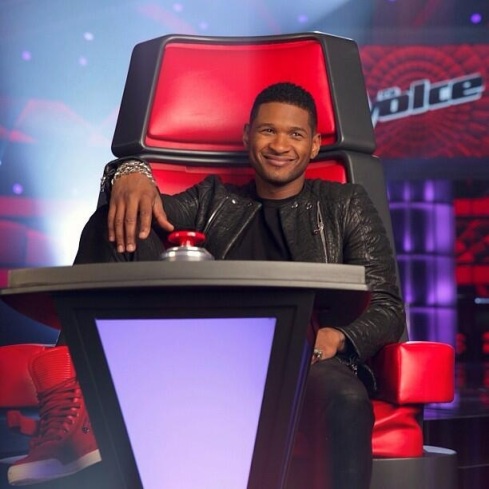 This week struck an interesting trending chord in the Twitter-sphere as an unusual hash tag made its way to the top.

While record-breaking music artist and The Voice Season 4 coach Usher is no stranger to the spotlight, it’s actually one of his body parts that’s made headlines rather than his body of work.

As one of the new judges on the hit NBC singing competition, his fame and out of this world talent have been put to good use so far as the final blind auditions came to an end. But, surprisingly, what has captivated America most aren’t his smoldering good looks, swooning smile or dynamic dance

page decided to “play a game.” It didn’t take long before hundreds of fans took over and submitted their own versions of the kicked-back, relaxed pose with that draped arm that drips with cool

So what more came out of this trending phenomenon?

may only have three tweets, but well over 450 followers and counting.

From pets to kids and even 90-year-old grandmothers, Celebuzz gathered the best photo versions of #UshersLeg that came out of Tuesday’s fan frenzy over Usher’s now infamous appendage.

We have a feeling #UshersLeg might be staying around for a while as the singing competition starts to heat up.

And as the saying goes — “if you can’t beat them, join them.”

So I couldn’t help but jump in on all the fun and take a stab at perfecting that Usher swagger.

Which do you think is my better #UsherLeg pose?

Sweet? Or with some attitude?