Forgot what happened before? Recap the last episode HERE.

We start off with Damon with Kai, the guy that they found in the “twilight zone,” when Bonnie comes in and they start to bicker about how they have to figure out how to get out of there and why 1994 is a significant year.

We go back to 1994 to supposedly the time when Damon did “worst thing ever.” We see Damon go to the Salvatore home to see Stefan but he can’t enter his home. That’s because a human owns the home and then he lets him in.

Now we go back to present time with Stefan on a call with Elena about trying to find Sarah, the girl that they compelled but now remembers that Elena is a vampire. Stefan is trying to leave town but Elena won’t let him. She is probably in Mystic Falls where the vampires can’t go and then says that it’s Matt and Jeremy’s responsibility to find her. So Alarec is with Jer who is super hungover at the doctors. 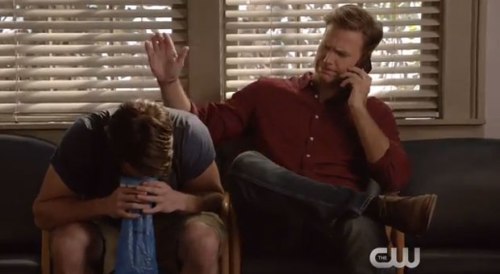 Now we go over to Matt and the couch who knows everything about the vampires but they start talking about this guy Jay who has gone missing. Back to “twilight zone” with D & B and Kai who wants to know Damon’s story.

We flash back to 1994 who is with Stefan hanging out with Damon and they talk about their life. Flashback to present time and it seems like Kai is accusing Damon of killing a pregnant lady and he gets mad. He tells Kai that he is does not know how to help them and then he’s like yes I do we need to harness the power of the eclipse and Bonnie is up for the challenge.

Elena looks at a picture of Stefan and Ivy and says, “She’s cute” and he says, “Was cute.” So now Stefan has decided that he is starting completely over, with a more human life. He tells Elena that she can be anything she wants to be. So they go to a bar to get drunk and “see the system in action.” What that means is that she has to hand over her daylight ring to Stefan and see what happens now…He gets down on his knees and he fake pretends to ask her hand in marriage and she says, “you’re not asking me to marry me because I’m pregnant?” and he says no, goes on to tell a long speech, she says yes and the crowd cheers. As he hugs her he says, “See, new life, new identities.”

So back to D&B and we go back in time to 1994 with Damon talking to a girl who is the younger Sherriff Liz, Caroline’s mom while Damon talks to Zack and his gf Gale. He notices her wrist and asks what happened and she doesn’t remember so he goes over to Damon to ask what he did to Gale and now Damon’s actions are revealed. So he compels Liz to leave and then Stefan gets mad at him and breaks his neck. We go back to present time now with Bonnie working her magic to figure out where the object that they need to leave is. She traces it back to…Kai’s pocket. He says it was a test to see Bonnie’s powers and he says, “Pack your bags we’re going home.”

1994: Now Damon is awake from having his neck snapped by Stef. He asks him why he did that and came back. Damon tells him that he wants to be with his bro and can teach him how to not have a vegan diet and take a roadtrip. Stefan is like “ok, cool yeah I’ll go on a roadtrip with ya…not!” Obviously not verbatim, he goes on to recall the times that D made him drink human blood and he went mad and all the bad things that Damon did. So that’s a no on the roadtrip.

Present: Stefan and Elena are talking and he explains his life and his many jobs and they start talking about Damon but Stefan doesn’t know that Elena had her memory erased of all things Damon so it’s a bit weird for Stef but they toast to change and it’s all good. 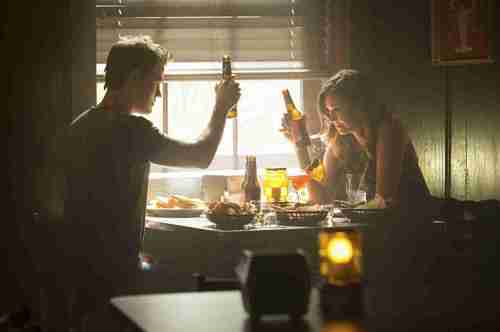 So we find out that Kai is a super serial killer who massacred his whole family, or a coven as he puts it. He is getting a bit creepy now. So they realize that the place they are at is not a hell for Damon & Bonnie it was made for Kai because the witches sent him there as his own personal hell.

Jeremy and Alarec are trying and Jer gets mad because he is still angry and frustrated about Bonnie’s death. Then Alarec tells him about his resentment and his life that was all messed up and that they have to find a way to keep going.

So now it seems like Elena and Stefan are saying goodbye to each other and then he goes over to a guy who apparently didn’t celebrate his engagement to Elena. So is seems like Stefan killed the guys brother and the guy starts beating Stefan up after Stefan acts all weird with him. All of a sudden Elena shows up, compels the guy to forget everything and asks Stefan what the hell is wrong with him This is so weird! What’s wrong with him? 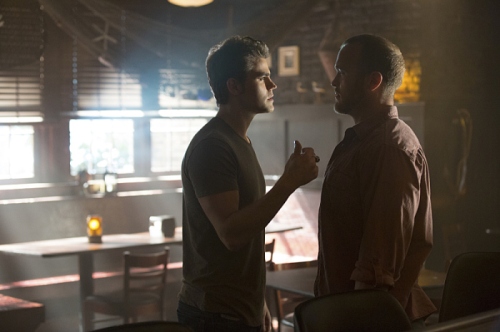 Bonnie is having seconds thoughts about finding a way out because she doesn’t want to let a serial killer out. But Damon tells her that they need to get out and she says that he doesn’t care about the murderer because he killed a pregnant woman. We flashback and see Damon enraged with Gale, Zack’s girlfriend who was pregnant and then he bites her, Stefan and Zack come in and evil Damon kills her in front of them.

We find out that Stefan compelled Zack to forget and cover up the killings and then Damon remembers that next time he got back he looked at Zack and it reminded him of how he messed up and as we know he also killed Zack as well. But Bonnie doesn’t want to work with Kai anymore and Damon tells her that he needs to go back to Elena and to his brother. The eclipse is gone so it seems that they have to take a raincheck and B says no. 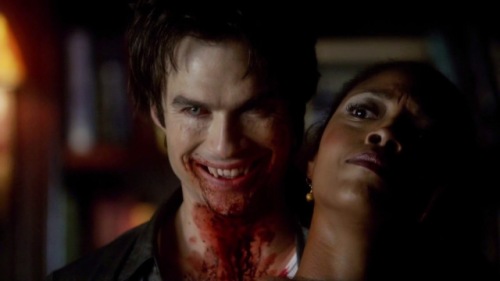 Now Matt and the coach are together in a car and Matt brings up slyly that Jay told him that he was tracking a vampire and pretends that it’s a crazy notion. But the teacher tells him, “Let me show you something.”

Now we go back to Elena and Stef and she asks him what is up. He tells her that they agreed to go their separate ways and she tells him she forgot her jacket. She figures that he is still grieving and wants to deal with it his own way. Then Stefan tells her that Alarec compelled her to forget and that she didn’t deal with the loss easily and she is in denial. So Stefan is explaining Elena’s love for Damon to him and that he feels the same way towards his brother. She doesn’t believe what he is saying to her but he tells her that she dealt with her pain in her own way and now he will deal with his pain his way.

Back to Mystic Falls and Matt with the coach who takes him to a secret spot in the woods. Matt asks where they are and he says a place he only takes people he trusts. He tells him that his wife was not killed in a car crash but that a monster killed his wife and it was a vampire. So he opens the door and we find Enzo inside and he tells Matt that this vampire killed Jay and he will find all his vamp friends.

We find Sarah at Jeremy’s home with a picture of her mom and we find out that her dad is Zack Salvatore!

Elena goes back to Alarec because she’s confused and he gives her a journal that she wrote in case someone spilled the beans. She reads the journal and calls Damon her soul mate and that Alarec can give her, her memories back but she advises that she doesn’t. That she was given a chance to start over and that she wants herself to take it and be happy because remember Damon was very hard. So Alarec asks her what she wants to do and she tells him if he can hold on to the journal in case she wants to read it again.

B & D are back together and Bonnie tells him that he is different from Kai because he feels remorse and is better that him. Then when they say that Kai can’t help them and do magic he walks in and tells then he can do magic in his own way, he can consume Bonnie’s magic and can potentially kill her or they can work together and go home. So either it’s work together or die.

We then jump over to Stefan with someone peeking at him, he turns around and it’s Ivy all bloody! She tells him that his friend made her drink blood and now she is thirsty! She’s an official vamp!

Whoa! What’s going to happen next?

One thought on ““The Vampire Diaries” recap: “Black Hole Sun””