Cuba = Amazing! What an experience!

I had the opportunity to go to Cuba from December 4 to the 8 and it was overall an extraordinary trip that I took with Garrett.

We decided to go there after I told him that I wanted to take a relaxing vacation after many months of hard work. I had also seen a couple people I knew post incredible photos from there.

We booked our trip and flew out of Tijuana, with a stop in Mexico City, before we left to Havana. In TJ we had to get a tourist visa, which was about $30, and when we got to Mexico City we had to get another one for like $15. In Cuba they didn’t stamp our passports just the visa and on our way back home our boarding pass. We took cash and exchanged all we had once we got to the Havana airport (since you can’t use ATMs anywhere or take out money.)

We arrived by taxi to a beautiful plaza where a nice gentleman led us to our hotel. We walked through cobblestone streets and saw how alive the city was. We saw people dancing on the streets with a live band inside a restaurant called Café Paris. Once we checked into Hotel Marques de Prado, also known as Hotel Florida, we walked out and grabbed dinner in the plaza near where we got dropped off. 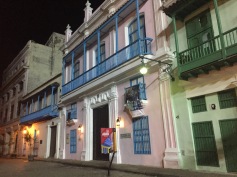 The weather was perfect. It was a little humid but good enough to walk around and not start sweating. Everywhere you looked was picture perfect. The colors, the sounds, the Cuban vibe was easy and mellow. There were tons of street performers and everywhere you turned a live band was playing. We ended up at Plaza Vieja where we had lunch and people watched. After a delicious meal of fish and rice and beans we kept walking until we arrived to the Club Havana Museum. Inside there was a lounge where you could sip on a variety of rum drinks, listen and dance to salsa music from the live band. 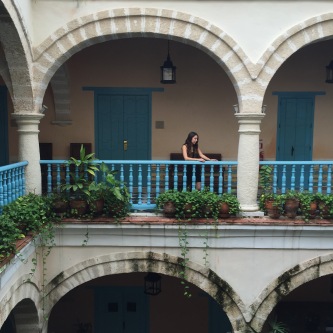 We kept exploring the city, took pictures and went back to our hotel to rest. That night we had dinner at Café Paris, ate a delicious meal that consisted of beef, rice with beans and obviously more mojitos. The best part was when we walked over to La Floridita, a bar famous for their daiquiris and being one of Ernest Hemingway’s favorites. Our friend also recommended that we walk over to the Bacardi building, which was close to La Floridita, pay the security a couple cucs and have him take us to the top of the building to see all of Cuba. At night it was breathtaking.

On our third day there we woke up and had ham and cheese sandwiches in the plaza. We then walked towards the Malecon to find the best looking vintage car to take a tour of the city. I ended up choosing a red and white ’57 Buick to explore the city and learn a little more of Cuban history. We paid $34 cuc for an hour tour. Totally worth it! 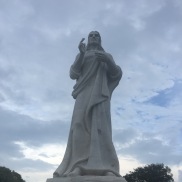 That night we had reservations at Paladar La Guardia, one of the non-government restaurants in New Havana (also where all the celebs like Beyoncé & Jay-Z dined). The place was gorgeous and the food was exquisite. That was also the place I “tried” recreating the Rihanna shot from her Vanity Fair shoot. Hahaha! When we got back we walked around Old Havana and found a Chocolate Museum where they served delicious hot and cold chocolate milk for about 1-2 cucs.

Day #4 was a little more relaxed. We had planned on going to the cigar factory but since it was a Sunday it was closed. We were also running out of money so had to be mindful of what we spent. (That meant cutting down on the mojitos. noooo) Our activities included going to the Hotel Ambos Mundos where we visited the roof top and then went down to the fifth floor, paid 5 cucs and went inside Ernest Hemingways room where he usually stayed. Inside were copies of his books, his bed and his typewriter and desk. 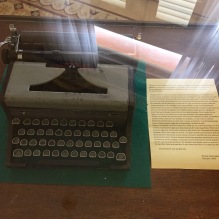 We ended that day people watching in Plaza Vieja, I had a cappuccino and Garrett had a hot chocolate. That night we dined at Café Europa and it started raining so we called it an early night.

On our last day it rained all day. We woke up early, got dressed and had to take a taxi to the Romeo and Juliet cigar factory since we didn’t want to get soaked. When we arrived we joined another group of Americans who were there with a People to People group. The factory was pretty small and cool. One floor was divided in two, one side was the school where they would learn how to roll the cigars before they could go to the other side and make them to sell. Another floor was where they would label and ship them. We later bought some cigars for our families and took a taxi back to the hotel, grabbed our last mojito in the hotel restaurant and waited until it was time to head back to the airport.

Getting back was pretty easy. When we landed in TJ it was midnight and we drove across the boarder. They only asked us if we had anything to declare and then got back into the U.S.

I would definitely go back again and explore the beaches <3. If you have any questions about our trip, let me know!