Will Anderson, Johnny Stubblefield and Kit French announced the release of their next album titled “Wide Awake.” The band’s fourth LP will be released on March 11th and available for pre-order on iTunes this Friday!

Their first single, “Without You,” is also being released at the end of the week. We’re also told to be on the lookout for a preview coming in the next couple of days.

The trio also announced tour dates for their accompanying “Wide Awake Tour”which kicks off March 26 at the Jefferson Theater in Charlottesville, Virginia and ends May 7th at the Old Rock House in St. Louis, Missouri.

Parachute’s last released an LP, “Overnight” in 2013. Make sure to go to http://www.weareparachute.com for more info! 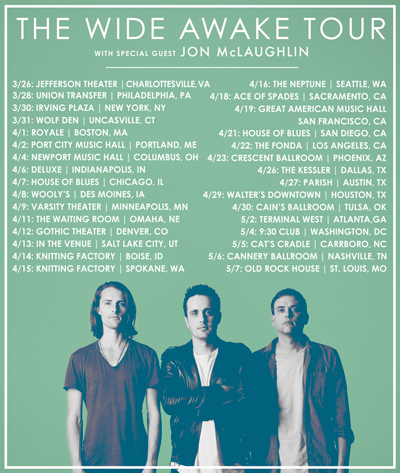