September 2016 marked Maria Grazia Chiuri’s debut at Christian Dior. Her first collection was a home run, with a fresh, feminine and magical new look for the house. Hoping to give Dior a more modern look, she told Vogue that the message of the collection is, “that there is not one kind of woman.”

Catering to many, the ex- Valentino designer impressed many around the world with her bold new creations. According to the magazine, for future collections, Chiuri plans to draw inspiration from previous Dior designers. “Monsieur Dior only lives 10 years. It can’t only be about him!” she said. “In some ways, I see myself as a curator of the house.”

The collection included tulle dresses and skirts, and faded slogan tees with my favorite being the “We should all be feminists” shirt. It also included white fencing jacket, coats and beautifully embroidered pieces, sneakers and new “It” bags. I’m personally excited to see what Chiuri’s future at Dior looks like and her new creations. I loved her work with Pierpaolo Piccioli at Valentino, and now she’s creating her own legacy.

Here are a handful of my favorite looks! Oh, there were so many! 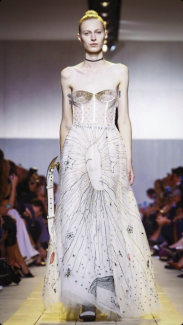