It’s the midseason finale of Hart of Dixie and Hanukkah is coming around the corner for Joel and Zoe. But let’s not forget the bigger problem here Dr. Brick is going to be a dad! Forgot all about that? Recap last week’s episode HERE!

Joel’s nanna Sylvie is in town to celebrate Hanukkah and absolutely adores Zoe. She is a lovely lady who believes that this holiday is a time for miracles and reminds us that its a time to expect the unexpected.

Funny how things in BlueBell happen unexpectedly, Brick runs into Shelby who is so excited to see him and tells him all about Fancys and totally misses the news about her baby bump, Tanzy is back in town and Zoe has a patient who happened to be her uncle and gets along with him splendidly. She asks him to lunch with Joel and his nanna, they have a great time and Uncle Brando ends up taking a liking to Sylvie. Until Vivienne, Zoe’s cousin who greatly dislikes her, takes Brando away and tells Zoe to never get in contact with the Wilkes.

The Harvest Festival is upon BlueBell and things are going to get interesting. Brick has a date with Shelby and desperately needs an intervention as he is getting over his head with the baby situation. Lemon has to call up Grandma Breeland to take measures into her hands who unexpectedly advices Brick to marry Shelby.

END_OF_DOCUMENT_TOKEN_TO_BE_REPLACED

Ladies and gents, George Tucker is back in the dating game with Lynly but still keeping it from Lavon to save each other from a potential beating. Lavon and AnnaBeth haven’t seen each other in a while and he’s slightly avoiding AB. To catch up on why these situations from Hart of Dixie are happening click HERE!

AnnaBeth has a new hobby these days, she’s making jam to occupy her time from Lavon avoiding her and Zoe Hart is trying her hardest to separate Wade from Joel. Zoe gets a call from Joel’s agent about how he hasn’t answered his call and that his first three chapters were past due. Now stuck in a rut, Joel seems to have lost his creativity and has writer’s block. 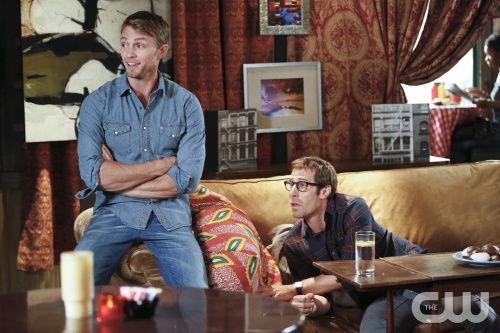 Lavon is struggling with AnnaBeth’s ultimatum, even though she stated, “This is not an ultimatum”, guys…so simple minded. He decides to put all his energy into the BlueBell race to beat Fillmore in the competitions. His secret weapon this year, none other than sweet cousin Lynly. As the day before the race comes, Lynly and George seem to have some fun together causing her to injure her knee. As Lavon comforts her she spills the beans on her relationship. Watch out GT!

Lavon goes to Tucker’s house boat he gives him an ultimatum, stop dating Lynly or be out of the race! George tells him that he can’t tell him who to date and thus goodbye George Tucker from the competition. Lynly and George discuss their situation and of course Lynly gets all worked up and happy that he quit the games for her, and so their new relationship begins. The day of the races comes and Lavon is without his secret weapon, no GT and no hope. This is when George goes up to Lavon, tells him what he and Lynly is true and if he wants he can help him out. The races begin and who brings in the win for BlueBell, none other than George Tucker! 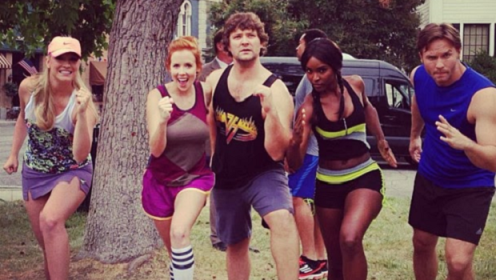 Zoe on the other hand gets all worked up as Tom tells her she could be the one to destroy Joel’s writing career. Being the great girlfriend she is, Zoe decides to turn part of the Rammer Jammer into the old cafe Joel wrote his first book at back in New York to get the creative juices flowing. Unfortunately Joel just doesn’t have it in him and tells her he might as well call his agent and let them know he can’t do it.

But he can, and he will now that Wade has told him to just chill and let the inspiration come when he least expects it, one way which Zoe is not happy with. As Wade gives his house keys to Joel to be a free spirit, the adventure begins. Zoe wakes up the next morning, Joel is no where to be found until Wade gets a text from his ex-brothers-in-laws with a picture of Joel’s hand tied up, he’s been kidnapped! The two go off to get Joel back and of course some time together with Zoe lets Wade bring up the fact that she still has feelings for him. Now at the Truitt residence Zoe wants her man back! With a little negotiating, the brothers helping Wade out at the bar, Joel is free and loving life. Once released he gets back to his laptop to write all of his adventure down.

Back with Lavon and AnnaBeth, Lavon offers a space for her back at his place for all her “jam”. The two love birds are back together and making me oh-so happy! Joel is fully immersed in his novel and Lynly and George have gone public. All this time has made us forget about dear Lemon and Dr. Brick. Lemon has been so determined to find out who bought Fancys soon realizes that she might not have wanted to know. As soon as she finds out she heads over to her pops and brings Brick in to see who the buyer was. Things get intense when we see Brick’s old flame Shelby setting up shop in her new restaurant and lo and behold a baby bump! Brick is going to be a dad?!

Can’t wait for next’s week baby news and did Wade and Zoe kiss in the preview?! Come back next week for another Hart of Dixie Recap!

Hart of Dixie was all new last night and thank goodness for Joel, who’s slowly gaining our approval. Speaking of approval, last week’s episode made Zoe’s new boy toy’s numbers of ‘likes’ rise, while Wade was still not too convinced Joel is Mr. Right. Click HERE for a full recap!

This week AnnaBeth is up to something and Lavon is going to Vegas for a bachelor party. Lynly is being very “George Tucker will be mine” and I don’t know how I feel about that. Zoe Hart tries to connect with family and Lemon gets an offer that is too good to be true. 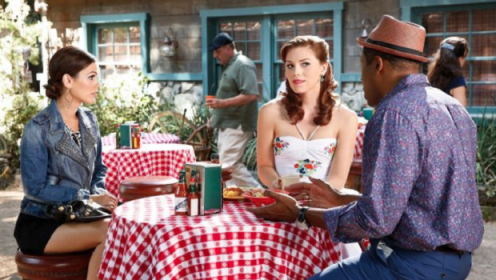 The best restaurant in the area has come calling for Lemon, Edward owner of Fancies is thinking of retiring and giving the business to miss Lemon. As the Rammer Jammer is hitting it’s all time high, Lemon is thinking about buying Fancies and making her dreams come true. As she thinks things through she decides to break ties with Wade and give Edward an offer. Sadly the offer was too low and Lemon ask Wade to take her back. Wade the good Samaritan, tells Lemon of course, but will this be enough for her?

Joel persuades Zoe to call up her relatives as they embark on their house hunting spree. Finally realizing that family is forever she decides to crash a relative’s birthday party. Overwhelmed by so many people, Zoe does her quirky thing she always does and upon arrival when she is asked if she is the entertainment she says yes, making Joel be the magician for the birthday party.

Zoe ends up loving everything about the Wilkes and decides that she is going to tell them who she is after she had lied to them about her identity as the magician’s manager and her name being Chloe. She finally opens up to her cousin who she was bonding so well with, unfortunately things turn sour when she says she is Zoe Hart and all her cousin has to say is, just because you’re in the blood line doesn’t mean you belong. Ouch!

Seem’s like AnneBeth’s parent’s are in town, thus we discover why she was so willing to let Lavon go out for a fun boys weekend. Worried that football rivalries might come between them, AB invites them over to have a happy family gathering then Lavon turns up and they try and make peace with her parents. Funny how they turn up the second time with Lavon’s team colors and jersey number. They love him! As they try and shmooze up to Lavon, we find out that they are really pushing marriage for their little BananaBeth!

As things get fired up with AnnaBeth’s parent’s nudging Lavon about weddings. AB stands up to them and tells them they are adults and will figure things out by themselves. As they depart for the night, Lavon makes AB upset when he tells her he is in no rush to marry. As AnnaBeth tells him that she needs more from Lavon, she needs to know that they are on the same Path. 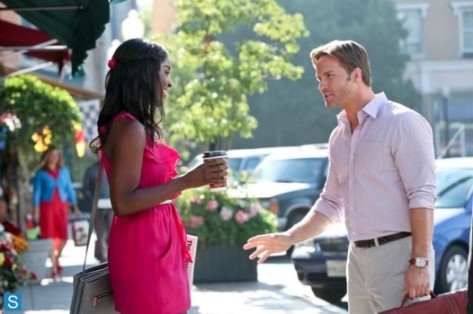 Talking about Paths, Lynly is just pushing her luck with George as she tries making him jealous any second she gets. As Tucker falls for her tricks she demands that he kiss her and to let them be together. Poor broken hearted George says he can’t, but then he does. So we’ll see what’s to come for these two. The episode ends with Zoe talking to Joel about her family and how she didn’t realize how much she wanted them until she saw how happy they were. But as things are always up and down for Miss Hart we know Joel is there to take care of her.

Next week looks like Joel is kidnapped and Zoe and Wade go to his rescue! Here’s to hoping for a spicier and more adventurous episode!

What did you think of this week’s episode? 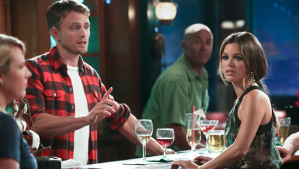 Zoe Hart lovers unite! Last week we left off with poor new bf Joel not situating so well in BlueBell. Lemon and Wade’s secret love plan back fired when Meatball arrivds at Lavon and AnnaBeth’s dinner party and news spread that he and Lemon were sleeping together.

In this week’s episode of Hart of Dixie, Zoe is as zany as ever, unemployed and with so much free time that all she can do is get into some trouble. Trying to plot a way into getting back her old job, Brick is not having it as he sends out a spy to make sure she doesn’t treat any of his patients. When Joel springs the idea of Zoe starting her own practice, George Tucker is quick to shoot down the idea.

Speaking of George Tucker, he gets his hands messy with little Lynly only to be saved by none other than Hart herself. Cricket is feistier than ever as the new leader of the Belles and is quick to shoot down any of Lemon’s ideas. With rebellion in Lemon’s eyes the game is on!

Lavon talks Brick into wooing an old friend in hopes to bring a minor league baseball team into BlueBell. Wade punches Joel to distract Brick from searching for Zoe as she is secretly treating a special patient and when it comes down to it, our girl Zoe gets exactly what she wanted!

While I do enjoy me some Hart of Dixie, I must say it has been a rather slow start for me. Can we just have Wade and Zoe be back together and be done with it? We’ll see what next week’s Halloween themed HoD brings us!