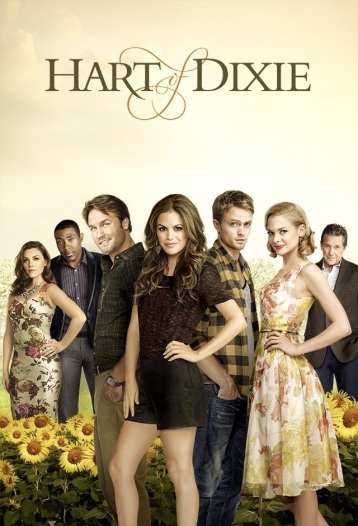 Welcome back Hart of Dixiers! Am I glad to have Zoe Hart back in my life and of course hottie Wade. Last night we got a brand new episode, “Something to Talk About” and my is it something to talk about! Need a refresher on what’s been happening in BlueBell? Recap the mid-season finale “Miracles” HERE!

To sum of from the last episode, Wade is into Zoe’s cousin, Lemon has left to take care of grandma Breeland and Tanzy is back and working at the Rammer Jammer. We start off with Zoe and her cousin Vivian chit chatting it up and finding out that she has a date with none other than Wade himself!

It looks like there might be a town merger between Fillmore and BlueBell and this is a big no, no for Mayor Hayes. Being that the towns are too small the governor of Alabama thinks this would be a great idea. But not really. Mayor Gainey and his lawyer Scooter McGreavy are all for it but there’s something fishy about this so Lavon and George approach Tanzy, who is dating Scooter to help them out and find out why they are so for this. So now it’s up to George, Tanzy and Lavon to save the town from this happening. As the press, presses AnnaBeth for info about whats happening with the town, she sets up a meeting with Wade, Zoe and Joel to come up with some type of breaking news to distract Dash from getting the goods. The final decision is that Joel and AB pretend to have an affair.

As Lavon, Tanzy and George head to Fillmore to sneak into Scooter’s office to find out what is happening, Lavon wonders if his cousin Lynly is in trouble since George and Tanzy have been hitting it off. Might we recall how George desperately tried to avoid eating out with Lynly and taking her near the Rammer Jammer only to run into Tanzy at Buttersticks. George tells Lavon that he has nothing to worry about and so that is that. While they do their deep investigating they find out that Fillmore is trying to take over all of BlueBell. When it’s time to head back to BB, Lavon is surprised to find out that AB has been “cheating” on him with Joel.

Lemon is away taking care of her grandmother and Brick is accidently playing house with Shelby when she interprets his kindness as an invitation to move into his home. Being that she’s 7 months pregnant, she is quite a handful and when Brick’s date gets to the house, she gets a surprise and quickly leaves. Poor Brick loses it and shouts at Shelby causing an awkward drift between them. Don’t worry things end well between them and Shelby is allowed to stay.

While Zoe takes pictures of Joel and AnnaBeth she sneaks a peek at Wade’s and Vivian’s date and starts to obsess about them. The next day Vivian is on cloud9 and asks Zoe for her thoughts on Wade. Zoe thinking she is doing a good thing tells Viv that she has no comment on Wade, thus making Viv think that Wade is bad news. As for Wade he asks Joel what his opinion is about calling someone the day after a date because he’s really into her. Joel tells him to go for it but unfortunately Vivian has already said no to the Wade train. Angrily, Wade goes to Zoe to ask her why she keeps messing with and punishing him. After Wade tells Zoe that maybe she’s the only one in the town that hasn’t seen he’s changed, he says why is she so crazy about him dating her cousin.

As Lavon and George discover that the Mayor of Fillmore is planning to take over BlueBell and put a giant mall in the middle of town square, they decide to hold a town meeting to set things straight. As the town panics, poor Lynly is worried that the time that Tanzy and George spend together might be a downer on their relationship.

Zoe Hart has a soft spot for Wade but maybe not same fire that she once used to have for him. Which might not be true because I know they are meant for each other! She heads to her cousin’s home to tell her that Wade is a top notch guy, that she loves Joel and that maybe Vivian should give Wade another chance.

Wade is happier than ever now that Vivian has giving him a call and they are set to have a second date. Rose might have the chance to get an article published in the Huffington Post and is thrilled. And all is semi-right in the BlueBell world, aside from maybe a merger and Lynly potentially losing George.

Come back next week as we recap the new episode and comment about how Wade and Zoe are meant to be together.

One thought on “Hart of Dixie Recap: “Something To Talk About””