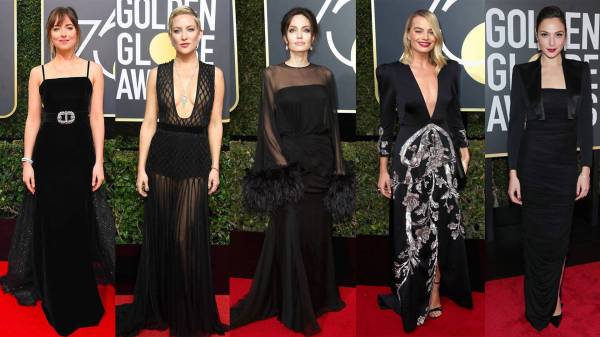 Women are joining forces to say “time’s up” in a distinctive style.

The 75th Golden Globes will be unlike any previous awards ceremony in that women from all areas of the entertainment industry are taking a stand against sexual misconduct and harassment in the workplace by opting to wear black on the red carpet.

For this year’s celebration, the females behind the newly-created Time’s Up initiative have encouraged attendees to wear the dark hue as a way of expressing solidarity for the victims, but also changing the narrative on how things are done in the industry.

END_OF_DOCUMENT_TOKEN_TO_BE_REPLACED

Awards season kicked off on Sunday, January 8 with the 74th annual Golden Globe Awards. This year I was stunned at how many amazing red carpet looks I fell in love with. Last night’s looks ranged from sexy and princess-like, to modern tuxedo suits and elegant fitted silhouettes.

Here are my favorite looks of the night and the designers they wore. 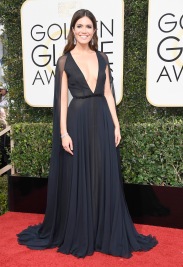 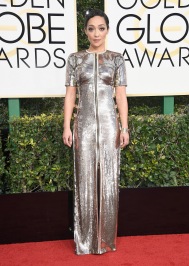 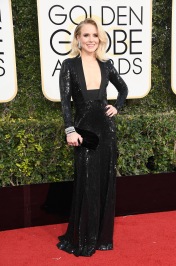 Trends of the night included plunging necklines and women who weren’t afraid to wear suits. I absolutely adored Mandy Moore‘s Naeem Khan cape dress, she looked angelic. Ruth Negga has become one of my favorites and that shimmering Louis Vuitton dress was like liquid gold! I personally believe that Kristen Bell and her Jenny Packham dress deserved way more attention!

END_OF_DOCUMENT_TOKEN_TO_BE_REPLACED

The biggest Hollywood stars stepped out to attend the 2016 Golden Globe Awards held at the Beverly Hilton Hotel on Sunday, January 10 in Los Angeles.

This year I was even more excited to watch the ceremony since I had seen many of the nominated films. But above all, I kept my eyes open to take in all the hottest fashion looks and select my favorites of the night.

Here are my picks for top 3 best dressed actresses: 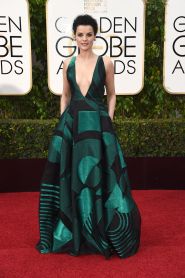 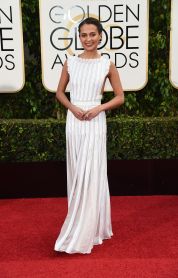 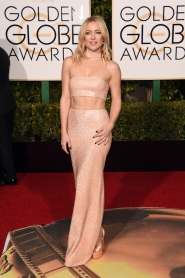 END_OF_DOCUMENT_TOKEN_TO_BE_REPLACED

MAC Cosmetics red lip makeup
bloomingdales.com
This Sunday, January 11 are the 2015 Golden Globes Awards and my take on nominee Emma Stone is that I would love to see her in a white Valentino Haute Couture dress.
What do you think?

The Primetime Emmy’s 2014 were a grand event that honored the best talent on the small screen.

Starting the eventful night was the red carpet where fans and celebrities got to showcase their gowns and jewels for the cameras.

This year I had a couple favs and there was definitely a favorite color being, white and red.

Anything with long sleeve and white is a dream come true! She looked so elegant and chic. Dress: Giambattista Valli Couture

Claire dominated the red carpet in this dress. She was definitely one of my favorites. Dress:Givenchy Haute Couture

No doubt about it that Camila Alves & Matthew McConaughey were the best dressed couple of the night! They look out of this world and drop dead gorgeous. Camila stunned in a Zuhair Murad dress & the actor in a Dolce&Gabbana. 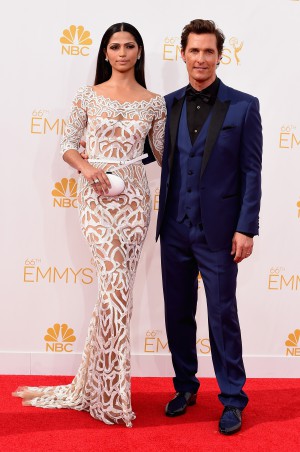 The one that surprised me the most was Sarah Silverman in her forest green Marni dress. 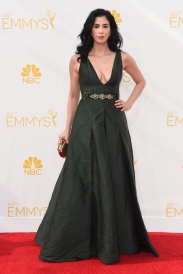 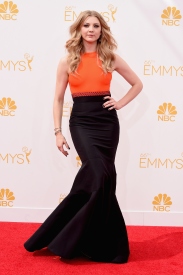 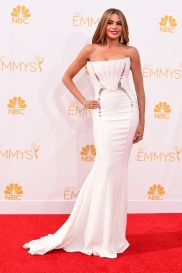 Natalie Dormer was a hit in J Mendel dress and Sofia Vergara was  a vision in Roberto Cavalli.

What were some of your favorite looks?

Hello La Vida-ers! Welcome to the first Thursday of February so in celebration of New York Fashion Week I’ll take you back to when I covered a smaller Los Angeles Fashion Weekend back in 2012.

Read the published article below or on Celebuzz HERE!

, where Celebuzz got an exclusive seat to all of the weekend’s designers as they showed off their hottest new collections. Opening night brought us LA-based designer Anthony Franco’s SS12 presentation where he told us about his past trip to Mexico that inspired his line,

“As soon as we landed there was a sunset and we saw the orange and pink sky meet up with the beautiful blue ocean and at that point I knew my collection was going to have those color pallets. I sort of fused the two between the men’s collection and the women’s.”

The weekend’s lineup continued with shows from the ever creative and fierce Betsey Johnson, Karen Capili, Kelly Nishimoto, Dina Bar-El and Beach Rays. Some of the top buys, industry elite and stylist were among the invitees as well as some of today’s most recognized celebs

Jack Black was one of the first stars to come out on opening night, along with True Blood star, Tara Buck, Glee’s favorite teacher Matthew Morrison who came out to support his model girlfriend, who walked in the shows all weekend, Angela Simmons sat front row for the Betsey Johnson show, as well Grey’s Anatomy  star Sarah Ramirez,  among others.

Last night’s performances rocked the stage, especially with ‘Yonce and Jay-Z lighting the stage on firing with their collaboration. Then Mackelmore and Ryan Lewis made us all tear up as they were part of a great wedding ceremony along with Madonna and Queen Latifah. Then Katy Perry went all Hocus Pocus and Daft Punk ruled the night’s biggest awards.

Here’s the complete list of winners from the 2014 Grammy Awards.

Song of the Year: “Royals,” Lorde

END_OF_DOCUMENT_TOKEN_TO_BE_REPLACED

The 2014 Golden Globes were this past weekend and stars stepped out in their most glamorous gowns.

Many winners, nominees and guests strolled down the red carpet and wowed us all with their gorgeous dresses and suits. This Trendsetting Tuesday I recap my favorite looks. From Sophia Vergara to Emma Watson, these ladies get a perfect 10! 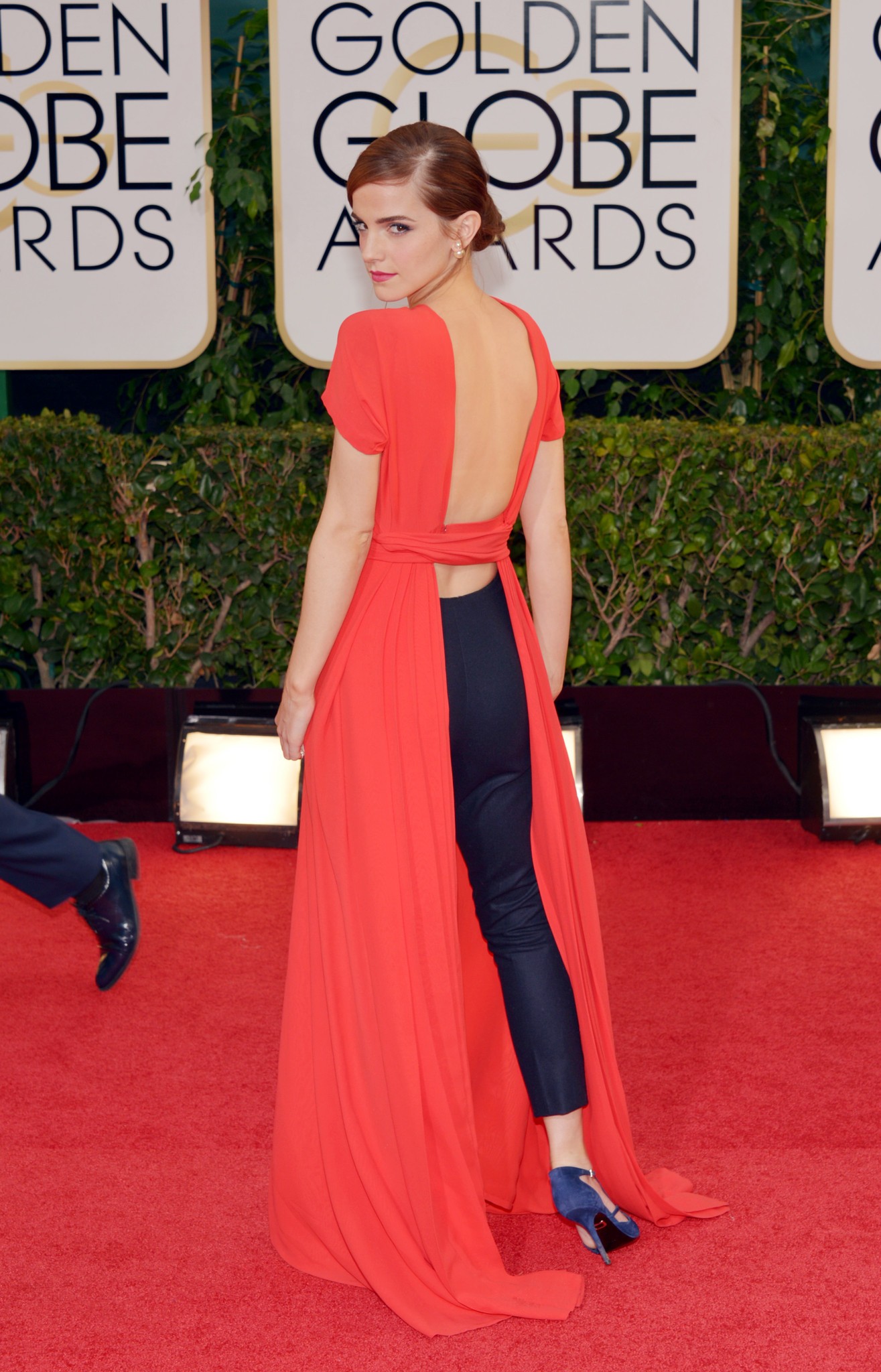 There were far too many beautiful ladies to pick just one. Which were your favorite looks? 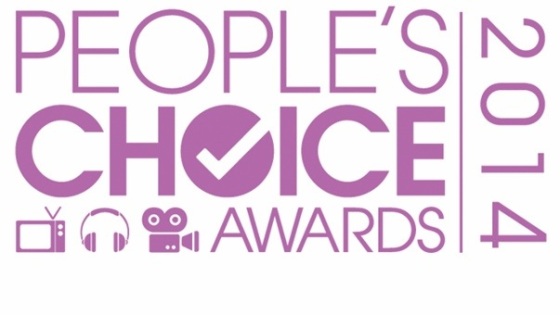 The beginning of the year brings tons of award shows and to start it off we have The 2014 People’s Choice Awards held in Los Angeles!

To check out a complete list of the winners check out The Big Winners of The 2014 People’s Choice Awards. 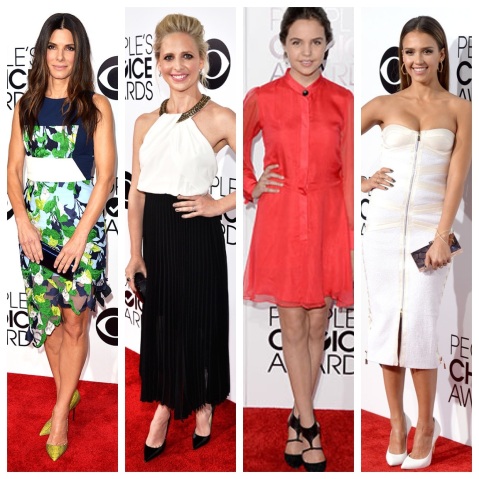 First to shine on my list is none other than Sarah Michelle Gellar. As a die-hard Buffy fan, she is always on my love list. Her white and black pleated dress was perfection on her tiny frame and she looks as gorgeous as ever. Next is the never aging Sandra Bullock. Can you say stunner?! While her dress isn’t my absolute fav, her makeup is flawless and she looks perfect.

Another rising fashionista is Bailee Madison, this past year was her greatest year in fashion, need a refresher, click HERE. Her coral dress with cutout black heels showcase her in a fun and age appropriate manner. Can we talk about how HOT Jessica Alba looked in all white? I mean come on! 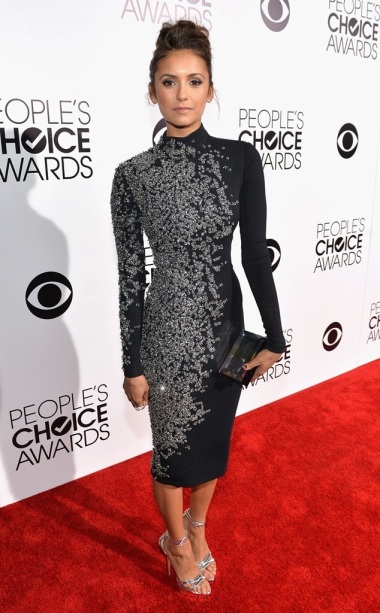 Let’s not forget about my favorite lady vampire, well at least on screen, Nina Dobrev. The Vampire Diaries leading gal was a knock out in a black, long sleeved, bedazzled, mid-calf length, Jenny Packham dress. Among my other favorites were Jennifer Hudson in an all white looking very slim and sleek, and Anna Faris in a nude sequin pant suit won my heart. While many weren’t for this look, I thought it was super fun, casually cool and appropriate for the People’s Choice Awards. Then who can forget about the shining Britney Spears! Looking fabulous is her signature nude and glitter, sequin dress. Looks like she’s in great shape and can you believe she won her FIRST PCA?! Really, it was a shock to me as well. 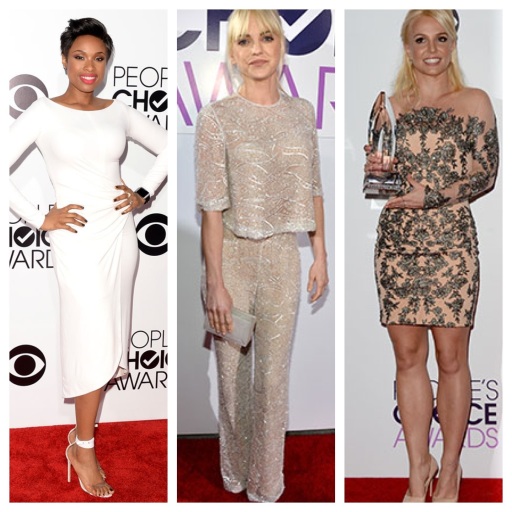 That’s a wrap for the 2014 People’s Choice awards. What were your best dressed celebs? Let me know!

Last night we got our first list of award show winners for 2014 at The People’s Choice Awards. With a slap-your-knee hilarious intro video on set of 2 Broke Girls with many celeb cameos, the show hosted by Kat Dennings and Beth Behrs was a great way to kick off award season.

Now let’s get to the good stuff! If you didn’t get a chance to watch the show, below is the complete list of winners.